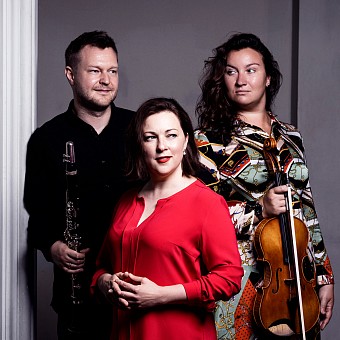 The warm glow of the dreamily romantic and keenly intuitive German composer Robert Schumann’s personality and music inspired not only those composers and performers that met him face to face, but also the modern musicians and composers that read his imaginative scores today. He was most eloquent in his chamber music, basing his musical stories on fairy tale motifs and vivid fantasies that were some of the biggest inspirations for his music, alongside his great love for Clara Wieck. The feast of Robert Schumann’s 210th birthday dinner has been prepared by three soloists – the ardent pianist with the spirit of an explorer Agnese Egliņa, conductor and clarinettist Guntis Kuzma, and the musician of the Amsterdam Royal Concertgebouw Orchestra viola section Santa Vižine. Schumann’s Fantasies will be served as aperitif, while composer and clarinettist Jörg Widmann, a truly well-versed master of German music, will offer a 21st century reimagining of Schumann’s Märchenerzählungen (Fairy tale narrations). And for dessert – a cycle of dedications by the 20th century modernist Gyoirgy Kurtg, who has also included in his work the most frequently occurring characters of Schumann’s piano music - Master Raro, who is thought to be the amalgamation of the personalities of Schumann and Clara Wieck.