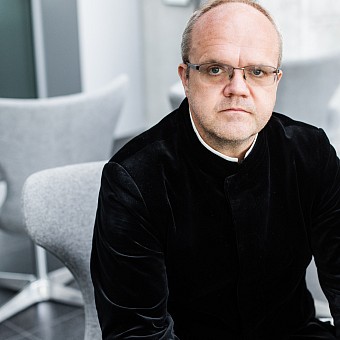 The most important week in Christian year is enveloped by the dark, throbbing shadows of the Passion of Jesus. However, the hard road to Golgotha leads to the triumph of light that we experience on Easter Sunday. On Good Friday, the joint concert programme of conductor Māris Sirmais, State Choir Latvija and chamber orchestra Sinfonietta Rīga, brings you this message via two monumental contemporary musical pieces.

Seven Last Words from the Cross is based on text from the four gospels - the parting words of Jesus. Over the past centuries, many have attempted to translate the poignant utterances that reveal much about the human condition in the world into musical language, including Italian Baroque composer Giovanni Battista Pergolesi, the Viennese classic Joseph Haydn, and French Romantic Charles Gounod. The most prominent contemporary Scottish composer James MacMillan joins them in the 20th century.
Arvo Pärt's sacred music composition Adam’s Lament was premiered at Hagia Irene in Istanbul. Its symbolic narrative borrows from the texts of St. Silouan of Athos, an Eastern Orthodox monk whose writings have been collected by his disciple Archimandrite Sophrony. St. Siluan's works have inspired the composer for decades, and Adam's Lament is the very peak of this fruitful symbiosis of the two spiritual giants. For Pärt, Adam manifests the humanity with its perpetual blunders and excuses. Forever and ever, Adam suffers and laments the betrayal of his Father, his deprivation of God's love and expulsion from the garden of Eden.