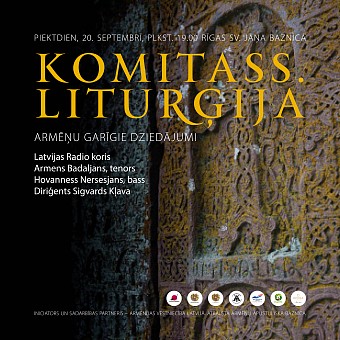 Soghomon Soghomonian (1869–1935), known as Komitas, was a priest of the Armenian Apostolic Church who is rightfully considered to be one of the greatest Armenian composers of all time. His musical genius has been praised even by the likes of Claude Debussy.

Komitas was excellent at playing the flute and piano; he was an outstanding conductor and musicologist, who collected and transcribed Armenian folk music.

Komitas studied at a theological seminary. It is no accident therefore that, alongside Armenian folklore, the sacred music left a particularly strong impression upon the composer. This experience later resulted in the impressive Polyphonic Sacred Liturgy for Men's Chorus.

In the words of Gevorg Geodakyan: “Liturgy for Men's Chorus is more than the peak of Komitas’ creative work. It is a whole new level in the evolution of the Armenian sacred music.”

The Liturgy was published in Paris in 1933 after its handwriting was transcribed and edited by Komitas’ student, composer and conductor Vardan Sargsian. Now, in 2019, following an initiative by the Armenian Ambassador to the Baltic states, Tigran Mkrtchyan, the Liturgy has been adapted for a mixed choir by the Armenian composer Vahe Sharafyan. With the support of the Armenian Embassy, this musical masterpiece will shine even brighter and more fully than before.

Thanks to the initiative by the Armenian Ambassador, the premiere of this new version of the Liturgy will take place in Riga. We are proud that this significant work of Komitas will be performed by the Latvian Radio Choir, together with soloists from Armenia and conductor Sigvards Kļava.

“Komitas’ music is well-known around the world - in France, the USA, Great Britain, and elsewhere. The Latvian public, however, is not as familiar with it. The new program by the Latvian Radio Choir Komitas. Divine Liturgy. Armenian Sacred Chants. is dedicated to the composer’s 150th anniversary. It will let us get to know better the breadth of the Armenian land and faith; to feel the great and invincible power of the spiritual world,” says Arturs Maskats.