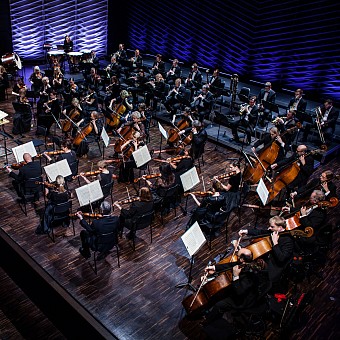 For more than 15 years, the Grand Concert of Latvian Symphonic Music has been a stable part of the Latvian concert scene. The tradition that was started in 2005 continues this winter - on the 28th of January, Latvian professional symphony orchestras will meet on the Riga Great Guild stage to perform the opuses of Latvian composers who are celebrating a jubilee this year, as well as a new piece created for the concert!

This time, the honour of premiering a piece has been entrusted to the Liepāja symphony orchestra. Lead by their new chief conductor Guntis Kuzma, the Kourlandians are bringing to Riga the Symphony No. 4 of the master of the large form - Ilona Breģe (1959). “To me, a symphony is like a musical novel. The driving force of the musical idea in a symphony is the message and the dramatic structure of the form, and based on these, the melodicism, harmony and the use of different techniques and orchestral textures are determined. Symphony No. 4 is dedicated to the memory of my dearest person in the world - my late mother Vizbulīte Breģe,” reveals the author.

Juris Karlsons (1948), who is celebrating a jubilee this year, is also a master of orchestral colours and dramatic timber. He created his work Jāzepa vīzijas (The Visions of Joseph) for a baritone and symphony orchestra inspired by the story from the Old Testament - the same story that also inspired the classic Latvian writer Rainis. This impressive opus saw its premiere in the summer of 2015 as the velvety timber of the vocalist Daumants Kalniņš perfectly harmonised with the Latvian National Symphony Orchestra, lead by the internationally acclaimed conductor Ainārs Rubiķis; these same musicians will perform it in this concert as well.

It is also not the first time that the LNSO will meet the principal cellist of the Brussels Philharmonic Kristaps Bergs; this time, their collaboration will give new life to Jānis Mediņš’s (1890-1966) Cello Concerto No. 2, which was created in exile.

It is notable that in 1940, Mediņš was the conductor as the Latvian Radiophone first premiered the Violin concerto of Helmers Pavasars (1903-1998), whose 120th birthday we celebrate this year. Back then, the solo part was entrusted to Voldemārs Rušēvičs, but in this year’s concert, the outstanding Paula Šūmane will perform the part in her first collaboration with the Latvian National Opera Orchestra. Lead by the conductor Kaspars Ādamsons, the musicians of our opera house will also shine light on the Latvian music patriarch Jāzeps Vītols’ (1863-1948) nearly a century old and undeservedly neglected work Dārgakmeņi (Gems) as they paint with sound to reveal the shine of amethyst and emerald, pearls, ruby and diamond.