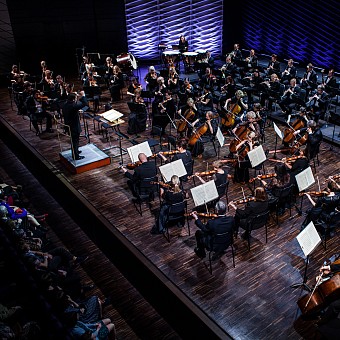 The Grand Concert of Latvian Symphonic Music has been an enduring part of the Latvian concert scene for more than a decade. Started in 2005, the tradition carries on this winter as well – on the 29th of January, the Riga Great Guild stage will bring together the professional symphonic orchestras of Latvia, resonate with the music of Latvian authors, and showcase new pieces written especially for this event.
The classics of Latvian symphonic music shall be represented by the 1945 work Latvju rapsodija (The Latvian Rhapsody) - the author of this vividly scenic score is Pēteris Barisons (1904-1947) who is rightfully considered one of the most spirited Latvian late romanticism composers. For the performance of the rhapsody, the Liepāja Symphony Orchestra will be conducted by the kapellmeister of the Mannheim National Theatre - Jānis Liepiņš, while the honour of being the soloist has been entrusted to the pianist Daumants Liepiņš - the Latvian Grand Music Award laureate for New Artist of the Year 2016 whose deeply personal manner of playing keeps receiving growing international acclaim.
The aforementioned award has also been awarded to the clarinetist Anna Gāgane two years ago; her wide range of expression and rich timbre have served as an inspiration to Jānis Petraškevičs (1978) - the exquisite sonic jeweler’s Concerto for Clarinet and Orchestra Long Walks has been dedicated to her. “As the name suggests, the metaphor of the composition is long walks - be they physical or spiritual in nature, like walks in one’s inner world; they may even happen simultaneously. Long Walks begins at an early morning hour and ends late at night: the imagery of the piece evolves from the pastoral to the dark and questioning. And yet, the run of Long Walks consists not of a gradual evolution of one material but moving through different points along the way.” Notably, the conductor of the Latvian National Symphony orchestra will be one well-versed in the nuances of the clarinet - Guntis Kuzma, an excellent interpreter of Latvian music and Anna Gāgane’s former teacher.
Alongside Petraškevičs’ new work - his former teacher Pēteris Plakidis’ (1947-2017) 1996 masterpiece - the splendor- and joy-filled Variations for Orchestra. Just like Plakidis, another Latvian music legend, the charismatic Mārtiņš Brauns (1951-2021) passed away on the year of his 70th birthday. In honour of the outstanding musician, we shall hear his symphonic ballad Tālavas Taurētājs (The Trumpeter of Tālava), written in 1975 as his diploma work for graduating the music conservatory. The piece saw its second ever performance November 2020 in the Liepāja Symphony Orchestra’s National Independence Day concert with the composer still present.
Historical notes also resonate throughout Zigmars Liepiņš’s (1952) suite Sarkanais mežs (The Red Forest). The new suite is based on the critically acclaimed 2019 Latvian TV series of the same name. Based on true events, the series tells of the time right after World War II, the activities of special forces, the fight of the partisans, and of hope and betrayal. Liepiņš has movingly captured these events, characters and atmosphere into music.
But right before the Aivis Greters-lead Latvian National Opera Orchestra, the Riga Great Guild stage will also greet Sinfonietta Rīga with their artistic director Normunds Šnē in their return to Linda Leimane’s (1989) recently premiered opus Ray-bows, which on this night will be showcased in a completely different version. The talented composer who dedicated this piece to her ever-reliable kindred minds reveals about her work: “Ray-bows is a rainbow arch-shaped multi-layer reference to the French spectralist Gerard Grisey’s works Vortex Temporum and Periodes. The piece strives for an organic connection between time proportions and sonic spaces - seven quasi-spectra as seven colours of the rainbow. The hot-subjective impulses in the outer two thirds of the arch are organized by seven muses: Gabriel, Daniel, Josephine, Sergey, Leonora, Ricardo and Emanuel, while the cold-objective peak of the time arch is marked by the red of the rainbow-colored spectrum. The third phase of the composition resolves to the initial state through mirror symmetry.”