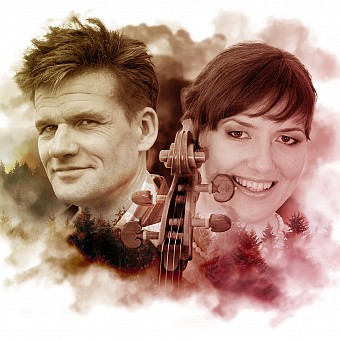 Magnificello is a concert performance for an unusual duet - the electrifying cellist
Gunta Ābele and striking actor Vilis Daudziņš will conjure an eloquent cello story. A
story about the sound of cello, about cellists, about the lives of composers,
weaknesses, twists and turns, and historical events of the 20th century.

The concert performance will feature captivating video installations as well as
profound musical and dramatic content, creating a special atmosphere for the
audience. It will not only be an aesthetic delight for theatre lovers, but also urge new
watchers and listeners to go on their own journeys of sonic and stage art discovery.
The centre of the production is the cello and its powerful, velvety sound, the
multitude of playing techniques and ways of expression. The story is based on quotes
from autobiographies of world-renowned musicians, poetry lines, and Wolf
Wondratschek’s story Mara.

The production contains impressive opuses for solo cello by Johann Sebastian Bach,
Pēteris Vasks, Pablo Casals, Gaspar Cassadó, and Zoltán Kodály.
The delicate tone and fiery temper of Gunta Ābele will elevate the musical side of the
production, and the acting of the widely beloved actor Vilis Daudziņš will give it an
intimate atmosphere and charm. The meeting of both artists on one stage will be a
special event in the Latvian culture life.