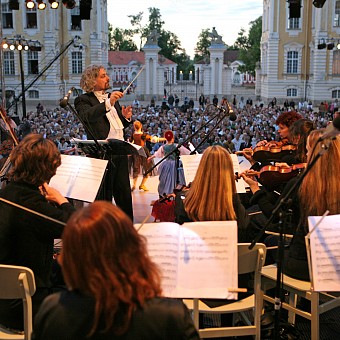 Once again, the closing event of the Early Music Festival will be Antonio Vivaldi’s violin cycle The Four Seasons – one of the most popular classical opuses that has seen countless performances and interpretations across the globe. The four violin concertos were first published in 1725 in a collection named Il cimento dell'armonia e dell'inventione or The Trial of Harmony and Inventiveness. And indeed, this music never lacks harmony nor inventiveness – Vivaldi had a lot of fun depicting scenes from nature and everyday life, and also spelling them out as instructions on the score. Coded into the music is a temper and fullness of colour that lets the imagination run freely, but it does require a brilliant technique of performance and lively musicality. This time, stepping up to the task of performing it alongside the orchestra Sinfonietta Rīga will be the brilliant violinist Daniils Bulajevs who has basically grown up right on stage, thrilling listeners, including noteworthy critics and stern judges of international competitions both in Latvia and far abroad…
In the opening of the evening, the well-versed conductor of Early music Andris Veismanis together with the experienced chamber orchestra will illuminate the pearls of 17th and 18th century music. Alongside pages from the French Rococo composer Jean-Philippe Rameau's opera music, including the Chaconne from the opera Les Indes Galantes (The Amorous Indies), the audiences will also hear the opera reformant Christoph Willibald Gluck's overture for the opera Le nozze d'Ercole e d'Ebe (The Marriage of Hercules and Hebe), as well as the “Sun King” Louis XIV's court composer Jean-Baptiste Lully's theatrics-filled suite from the opera-ballet Le Bourgeois gentilhomme, that satirically depicts the behind the scenes of the lives of the bourgeois.