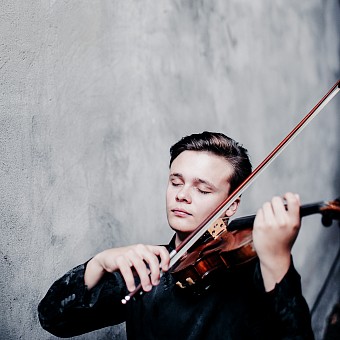 The violinist Daniils Bulajevs is one of the most promising musicians in Latvia. He’s played with collectives like Kremerata Baltica, Glasperlenspiel Sinfonietta, Moscow Virtuosi, Salzburg Chamber Soloists, the Stuttgart Chamber Orchestra, as well as orchestras in Macau, Tatarstan, Armenia, Russia, Lithuania and Latvia. Daniils Has been victorious in several prestigious competitions, with the most recent one being in October in the United Kingdom where he earned two First Prizes and the Audience Prize in the Windsor Festival International String Competition. For his creative achievments, the young musician was nominated for the Latvian Grand Music Award in 2020.

In this chamber music concert, which will also feature Daniil’s contemporary - the Emīls Dārziņš Music Secondary School graduate, pianist Maksims Taņičevs, the programme will contain both well-known music and pieces that are rarely heard in Latvia. Alongside the popular favorite - César Franck’s Violin sonata, we’ll hear Robert Schumann’s  Sonata for Violin and Piano No. 2 in D minor that the composer dedicated to the violinist Ferdinand David, as well as the masterful violinist and composer Eugène Ysaÿe’s Poème élégiaque that was inspired by Shakespeare’s Romeo and Juliet and dedcated to the French romantic Gabriel Fauré.